Melody Caudill is a 16 year old singer-songwriter from Los Angeles, California. Coming from a musical family, and learning how to play piano at the ripe age of four, she’s been immersed in the creative world of songwriting since before she was in kindergarten. After picking up the ukulele at 13, learning guitar became the natural next step. With inspirations from artists like Priscilla Ahn, Phoebe Bridgers, and Elliott Smith, Caudill writes with a certain sense of vulnerability and confidence.

Ever since she could remember, Melody was always making up new songs. “It was never a question, I always did that.” Caudill shared about writing her own music. At the age of 12, she became enamored with music in a new way. She decided to record some of the songs she had written at 13 to keep as a makeshift time capsule for herself. After the producer told her she should consider releasing the music she had created, Melody did just that.

At 13, she recorded and released her first EP, Thirteen. Thirteen chronicles the life of a pre-teen navigating new life changes. Now almost 16, Melody has written her second EP, Teachers Pet. Teachers Pet captures the essence of what it’s like to be in high school dealing with issues of self-confidence and finding a sense of belonging. However, Melody isn’t to be boiled down to another angst-driven teen. Her songwriting touches the core of the emotional turmoil we all go through. Whether that’s feeling smaller than your peers or being afraid to show your true self, there are just some inner-struggles we never grow out of. 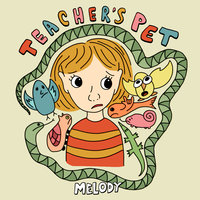