Pittsburgh’s Same cast a sepia tone across a ‘90s DIY-indebted style of indie rock. Their debut LP Plastic Western is at times range-y and raucous, but it also spends a lot of time being thoughtfully languid, dreamy in a night-under-the-stars kind of way." says the Alternative of the upcoming LP

SAME met each other sometime during their college years in the early 2010s, while attending shows in the Western Pennsylvania DIY punk scene. Born out of the ashes of a previous band that Caggiano, Higgins and Stern played in, SAME formally came together around 2015. For nearly a year, before the band released any music or played any shows, they wrote song after song, trying out different musical ideas until they honed in on a sound that clicked. “We spend a lot of time talking together about music, analyzing what we like or don’t like and why,” Higgins says.

A full-length LP was the original goal for SAME’s first release, but that eventually turned into two EPS—2016’s Weird as Hell and 2018’s Forgot to Say ‘Action’—as the band continued to tinker with its sound. “We are all into pretty different music, but we are on the same page in terms of how we want to approach writing,” Higgins says of the band’s songwriting process. Once the band locked into a sound that felt right, it was off to the races to record their first LP. That is until Stern broke his wrist in a skateboarding accident weeks before SAME was set to hit the studio. As a result, the band pushed back their recording date and used the time to write more songs and tinker even more with their sound, adding keys and electronic elements to the mix. “Jake breaking his wrist probably made the record better than it would’ve been,” Higgins says. “It dramatically changed our sound. We had talked about adding keys before, but since we had extra time and Jake only had one useful arm the opportunity forced itself on us.”

It’s a sound marked by rich reverb, bursts of jangly slacker-pop precision, and a keen ear for experimentation—especially on Plastic Western’s lush instrumental title track. From the lazy meanderings of “Landlady” and “¿Cómo está la serenidad?” to more driving tracks like “Shoot It” and “Cherry Pull ’N Peel,” each song on Plastic Western sets off in compelling and, sometimes, unexpected directions. In each song Caggiano’s lyrics paint abstract images that cast an ethereal tinge over the music. “You can either paint a picture of a sailboat, and everytime you see it it’s always going to be a sailboat, or you can create an abstract painting that shows you something new every time you look at it,” he says of his lyrics. “I try to do the latter. The lyrics have references to real things and real experiences, but there’s room left for the listeners imagination. 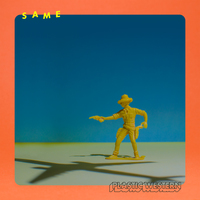