Lauren Records turned 10 years old! There's too much to say about it all, but for now I had this designed to represent some key points and fond memories! You can read some notes about the images, and if you'd like to you can order a shirt! Forgive me, I woke up and started writing this today without being fully caffeinated. Designed by Yasmine Sayre. 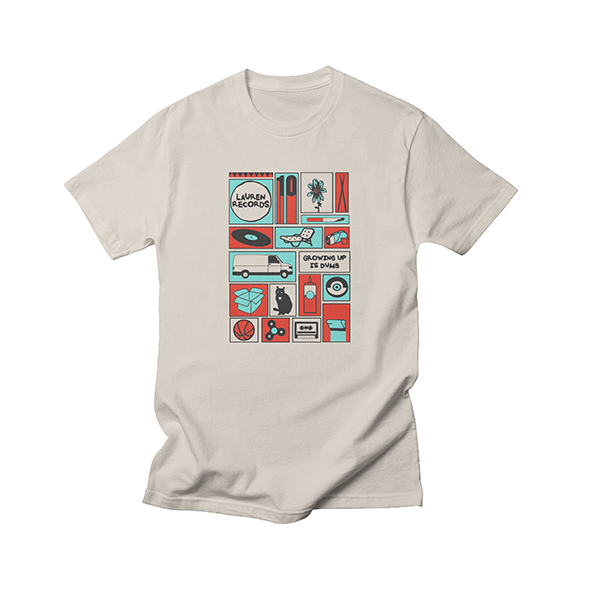 Long thing about the label that kind of summarize the images:

Lauren Records is 10 years old now! It just kind of happened. It started with playing drums in Baby's Breath / Summer Vacation and being interested in all the things my friend Mark would do. I got intro'd into things by watching his band Moldar and then later playing with him in SV. He ran a distro a did a zine called KYEO SPEAKS and introduced me to this kind of music and DIY in general. After that I started meeting awesome people in bands that I admired like Shinobu, Joyce Manor, Pangea, Watercolor Paintings and many more. It was all new to me; house shows, cafe shows, food not bombs, vinyl, CD-Rs with packaging made of brown lunch bags. After getting to meet a bunch of cool people I wanted to put a compilation together with all the bands I was becoming friends with. Partially because what else was there to do, and secondly because I loved the interconnection between everyone and helping form that wherever I could.

I started wanting to be able to help or be a part of things so I had to find something to do. I started dubbing cassettes 1 at a time for local bands and assembling them, booking shows, I built a wooden screen printing press, watched a ton of youtube videos, bothered Chris Reject at LVAC with questions, and started making shirts for bands.

Some of the first big moments for me was when Todd C. (Recess Records, Toys that Kill, URTC) said yes to being on the first compilation I released, 'I Think We Should Stay Away From Each Other'. Todd participating in things I was doing, whether it was shows or releases, opened the doors to a lot of things, he really is a nice guy. After that, bands like AJJ and Japanther agreed to be on it, leading to me getting to put out the next AJJ and Japanther albums on cassette (Knife Man & Beats Limes and Rice). He also gave me a van years later that I would use for Winter Break tours and to take other people on tour. It just kept stemming from him. Also a shout out to Razorcake for letting me come over to talk me through how to fill out a vinyl order form and Muy Autentico Records for telling me how to start a label. I don't remember if at the time I wanted to release more things than just the comp, but it started to just make sense as time went on.

I think the next big relationships I formed was with my friends in Walter Mitty and His Makeshift Orchestra, Leer and the rest of the San Jose crew, and the legendary Tim Burkert and Donna Ramone & co. at 12th&G and VLHS. This was the time period when I felt like we were all doing really cool shit. We did a couple tours with those bands up and down the coast and they were killing it. VLHS was our home base in Southern California. There's no point in really trying to get into it, but that place was probably the most important thing the label was ever somewhat involved in. Even if it was just being there and being able see friends it was truly a magical place that can never be replaced to replicated. I know everyone probably feels that way about their spot, it's just special to me and is hopefully a place all my friends have good memories of.

Growing Up Is Dumb was just the same thing as the rest of it. I just wanted to get all the people I met and liked under one roof to meet each other and get to have fun. It was a 2-3 day DIY music fest that happened 2.5 times. It was also Rafa's Tacos first show, a real day 1 homie who then started serving food at almost all of our VLHS shows going forward. A true staple in our diets. Some of my favorite memories was around GUID, when a bunch of people slept over during the fest. I think Blowout, Leer, Diners, Winter Break were all there and more. We all went to Santana's the next day, the go to burrito spot in Pomona. I just remember the place being empty and us rolling in like 30+ people deep, I love it. The final year we filled up one of those big gatorade jugs with mimosas and had basketball games at a park before the show. The best thing about that was the people who showed up not even to play, but just to eat pizza and watch.

Lots of people to thank and things to talk about, way too many, but I think that just about covers all the images in the shirt design. Special shout out to all the bands for being a part of it, Asian Man Records for helping me with anything I ever need, Norman the best cat, Yasmine for the artwork, all the friends who have pitched in to help, and the roomba for keeping the floors clean. Thanks for 10.